The concept of a pet dog being a faithful friend and a fun and fulfilling part of everyday life is hardly new….but the potential benefits of that relationship for depression sufferers often goes unrecognised

The subtle psychological, physiological and sociological benefits that our relationships with animals have on our emotional wellbeing and lifestyle are, even in our modern scientific age, only now being discovered and often go unrecognised.

The mutually beneficial relationship between man and canine dates back to prehistory, when both found survival easier when they co-operated. For humans, dogs offered early warning of potential attackers and, in turn, dogs benefited from food scraps and the protection of a campfire.

And so… the first animals were tamed and the human-dog bond was sealed.

If you hear the word “service dog”, the first image that springs to mind is probably a guide dog for the blind. But even that well-established and highly regarded movement was only set up in 1934, less than a hundred years ago. Over the past fifty years, pioneered in the United States, awareness has grown of the diverse disabilities and illness symptoms a dog can be trained to help support people with and the term “assistance dog” was born.

We’ve also developed a deeper insight into the mental and emotional health benefits that animals bring. For example we’ve discovered that “therapy dogs” or other therapy animals brought into hospitals provide many therapeutic benefits to inpatients.

“There’s no need for a dog to have specialist training to help someone suffering from depression.”

Its important to understand that its not at all necessary for a dog, or any other pet, to be an officially trained “psychiatric service” or “therapy” animal in order to be able to help someone who is suffering from depression, stress, anxiety or other illnesses. In fact many of the therapeutic benefits come from the changes in lifestyle that follow as a natural part of dog ownership, such as increased exercise and time outdoors in nature and reduced social isolation.

Dogs can help symptoms of depression because they are intrinsically social pack animals and instinctively form close bonds with other members of their “pack” or family. So by their very nature, they will help provide emotional support by being their affectionate, loyalselves. 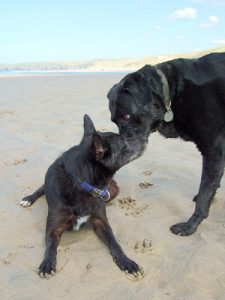