“How Saving Sammy Saved Me”

Kerry* was 28 when she fell severely ill with depression after a series of traumatic life experiences. Then she decided to rescue Sammy. This is their story….

“I was married with a successful career in London when my life fell apart. I became ill after prolonged family and marriage difficulties. Finally a serious car accident made me realise I had to do something. I tried counselling and my husband and I started a new life in Scotland, but moving to a new area brought added pressure.  I left all my friends behind, felt increasingly isolated and struggled to cope. After collapsing at my GPs I was put on antidepressents. Within six months my marriage collapsed. I was estranged from my family and with no one to turn to I hit rock bottom.

Things were bad, I lost the ability to get up in the morning,  life felt meaningless,  I slept most of the day away due to the effects of the anti- depressants and my emotional exhaustion. My psychiatric nurse was concerned: I wasn’t eating, hadn’t unpacked and was sleeping on the floor  of my new pad in a bare room.

“Things were bad, I lost the ability to get up in the morning,  life felt meaningless.”

One happy childhood memory was of my Labrador Snoopy, who’d been my faithful pal, so I decided to do one good thing with my freedom and adopt a rescue dog.
“How about this one then? He’s a real sweetie,” said the lady at the sanctuary. I looked into a cramped wooden shed and saw a silent black collie mix with droopy ears, listless eyes and a fearful body, tail tucked under his legs. This wasn’t the pure golden lab I’d imagined. I was even more nervous when the lady said he’d been brought back by his first adopters. I wasn’t sure if I could deal with a problem dog. “Go on,” she encouraged “Take him out and get to know him. He has doggie depression but used to love playing ball”
In the paddock I found an old tennis ball and threw it. Suddenly Sam’s eyes lit up and he dived after it, bounding back to drop it right at my feet. Sammy was a different dog in minutes, his ears perked up and his tail was wagging furiously. My decision was made.

Sam adjusted quickly to his new home; he loved curling upnext to me on the sofa and seemed to crave affection as much as I did. Rescuing him made me try to get a routine going. After all, I had a responsibility to care for another living being. At first I went straight back to bed after letting him out. But eventually guilt and an impatient, affectionate, warm wet nuzzling nose would get me going enough to give Sammy some exercise and a ballgame. That was the start of my recovery.

“Sam adjusted quickly, he loved curling up next to me and seemed to crave affection as much as I did”

Step by tiny step, Sam brought me back to life. After feeling numb and worthless, I gradually started to feel flickers of self-esteem in caring for him and enjoyed the feeling of having affection returned. I felt encouraged watching his canine version of depression vanish. Perhaps unconsciously a hope sparked that I might one day achieve the same with mine.

After three long months regaining strength, I was ready to start back at work. Just before, I took Sammy on holiday to the sea for the very first time. His joy and wonder at the waves and manic bounding up and down the beach jolted laughter out of me. Then I leant on a rock and sobbed my heart out.

Twelve  months on and I’ve come a long way  in rebuilding my life. I’m back in full time work, have made friends in my village who dog-sit Sammy and I’ve found new interests.

“I’ve come a long way in rebuilding my life and have rediscovered happiness. Its all down to Sammy, he saved my life.

“Finally, I have rediscovered what the word happiness means. Life is good again. And its all down to Sammy, he saved my life. What’s more, every time I see him wiggle madly with excitement when I get home, I know I saved him too. ” 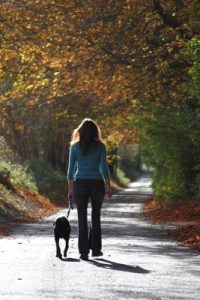 * Names and personal details have been changed for confidentiality